Edmond "Ted" Lapidus was a Parisian designer born to Russian immigrant parents in 1929. The son of a tailor, Lapidus completed an apprenticeship with Christian Dior before launching his own brand in 1951, at age 22. Lapidus joined the Chambre syndicale de la haute couture (the French high fashion designers' trade union) in 1963, after which he more fully came into his own. Lapidus fashions offered a distinct unisex style that was much in-demand in the revolutionary 1960s. Lapidus designs often featured safari themes and military elements such as epaulettes on the shoulders. He is widely credited with helping to popularize blue jeans in mainstream fashion. Lapidus fashions were popular with influential stars of the day, including Twiggy, Alain Delon, Brigitte Bardot and the Beatles, in particular John Lennon. The white suit worn by Lennon on the cover of the Beatles album "Abbey Road" was designed by Lapidus. Lapidus persuaded Twiggy to don a suit and tie instead of her typical mini-skirts. Lapidus is also notable for utilizing mass market production techniques, thereby making his fashions more affordable to the average consumer. The Ted Lapidus brand expanded into accessories in the 1970s, as interest in haute couture began to fade. One of the earliest designers to form a partnership for the production of fragrances, Lapidus first collaborated with L'Oreal in 1970 to offer fragrances under the Ted Lapidus brand. In 1989, Lapidus's son Oliver took over the house. In 2000, the Lapidus label officially ended its couture division and focused exclusively on accessories and fragrances. Ted Lapidus passed away in 2008. Vu was the first fragrance, a men's scent which appeared in 1975 when the fragrance license was held by L'Oreal. The fragrance license for Ted Lapidus transferred to the Jacques Bogart Group in 1983. Designer Ted Lapidus has 29 perfumes in our fragrance base. The earliest edition was created in 1975 and the newest is from 2015. Ted Lapidus fragrances were made in collaboration with perfumers Alexandra Carlin, Gerard Anthony, Roger Pellegrino, Pierre Bourdon, Martin Gras, Jean Jacques, Bernard Ellena, Maurice Roucel, Norbert Bijaoui and Francis Kurkdjian.
Read more
Perfume for women
Sort 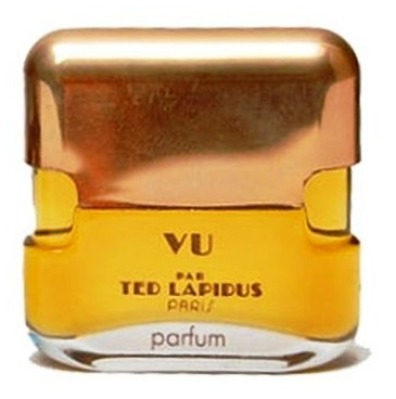