Sonia Rykiel is a French fashion designer born in 1930. Rykiel entered the fashion world originally as a window dresser, then married the owner of an elegant women's fashion boutique, Sam Rykiel. During her first pregnancy, Sonia Rykiel discovered she could find no soft, comfortable maternity sweaters that suited her style. She used a Venice-based supplier to her husband's store to design her own creations. She began selling her pieces in Laura, her husband's boutique, and it is her sweaters and knitwear which would eventually be her key to fame and fortune in the fashion world. The pullover sweater is Rykiel's signature piece, and Rykiel has taken it in every possible direction. She opened her first boutique under her own name in 1968. She was dubbed "Queen of Knits" by Women's Wear Daily in 1970. Rykiel's innovations with the sweater include putting the seams on the outside, creating sweaters with no hem, creating loose knits designed to be worn with lining, creating very long and very short sweaters, and knitting words into sweaters. Rykiel has described her own designs as "la demodé" ("the unfashion") and she encouraged women to adopt a look that suits their individual personalities rather than following the dictates of couturiers. Rykiel has earned numerous accolades and has authored nine books, in addition to her work as a designer. Now in her 80s, she remains active as the Honorary President of Sonia Rykiel. Daughter Nathalie Rykiel has followed her mother into the fashion world, first as a model, then with staging fashion shows for the Rykiel house. She started the company's children's line, Rykiel Enfant in 1983, during her own pregnancy, and initiated the secondary line, Sonia by Sonia Rykiel, in 1989. She was eventually named Managing Director and Artistic Director of the company, and today serves as President and Artistic Director. Sonia Rykiel's first fragrance, Septieme Sense, was introduced in 1979. Under daughter Nathalie's direction, the fragrance division expanded in 1990s with Le Parfum, L'eau de Sonia Rykiel and Rykiel Homme. Nathalie herself served as the advertising face of Rykiel Rose, introduced in 2000. Many of the fragrances in this era were bottled in a pullover-shaped flacon, an ode to the company's signature knitwear. With a series of successful fragrances already in production, the house of Sonia Rykiel has continued to introduce new fragrances in the 21st century, now with distinctive packaging, in conjunction with Selective Beauty. Designer Sonia Rykiel has 15 perfumes in our fragrance base. The earliest edition was created in 1979 and the newest is from 2008. Sonia Rykiel fragrances were made in collaboration with perfumers Jean-Pierre Bethouart, Emilie (Bevierre) Coppermann, Richard Ibanez, Jean-Marie Santantoni, Edouard Flechier, Gerard Anthony and Anne Flipo.
Read more
Perfume for women
Sort 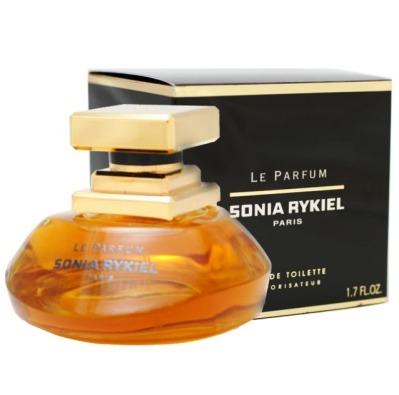