Sergio Tacchini was born in Italy in 1938. His career as a professional tennis player helped him design innovative sportswear. His designs are tailored to the specific needs of athletes. Tacchini became a professional tennis player at the young age of 17. He played matches in the Davis Cup competition, was an Italian Champion in the single's competition in 1960 and one half of the Italian Champion in the double's comoetition in 1967 and 1968. He founded Sandys S.p.A. while he was still an active player. The company was renamed to Sergio Tacchini a few years later, after his retirement from the professional tennis circuit. The concept behind the brand was the design of elegant and trendy sportswear during a time when white was the color every player chose for their tennis outfits. When Tacchini's tennis outfits proved to be a hit with customers and athletes alike, the company expanded their product portfolio by designing sportswear for skiers, golfers, sailors and for people working out. Tacchini sponsored numerous tennis players during the company's heyday. Among them were: Jimmy Connors, Ilie Năstase, Mats Wilander, John McEnroe, Martina Navratilova, Sergi Bruguera, Pat Cash, Gabriela Sabatini, Pete Sampras, Martina Hingis, Dinara Safina and others. Billy Ngok, a businessman from Asia, bought the company in 2008 and, by the end of 2011, had opened around 100 outlets worldwide. The first fragrance to be released under the Sergio Tacchini brand name was Sergio Tacchini Homme in 1987. The fragrance features mainly woody notes and accords of citruses. Sport Ego, another fragrance for men, centers around green apple, bergamot, cardamom, cyclamen, water jasmine, vetiver, lily-of-the-valley, leather, amber, oakmoss, musk and cedar. Sergio Tacchini Donna, the first fragrance for women from 1988, is a floral composition with fruity, aquatic and sweet notes. This fragrance has been one of the company's top sellers since its launch. Stile Donna was presented in 2004. This scent is based on prominent notes of cedar, sandalwood, magnolia, gardenia, saffron and angelica. The men's version, Stile for men, was composed as a warm and spicy fragrance by Karine Dubreuil. 2011 saw the release of three fragrances of the house of Sergio Tacchini. Blooming Flowers, a floral fragrance, is made of gardenia, lilac, jasmine, lily of the valley, peony and iris. O-Zone Pink Wave, a sporty scent for women, features accords of citruses, rose, cherry blossom, apple blossom, cedar, vanilla, jasmine and tea. The edition for men, O-Zone Green Wave, was composed of lemon, grass, red apple, bergamot, mandarin orange, cedar, vetiver and green notes. Designer Sergio Tacchini has 28 perfumes in our fragrance base. The earliest edition was created in 1987 and the newest is from 2015. Sergio Tacchini fragrances were made in collaboration with perfumers Symrise, Christophe Raynaud, Karine Dubreuil, Alexandra Carlin, Delphine Lebeau and Benoist Lapouza.
Read more
Perfume for women
Sort 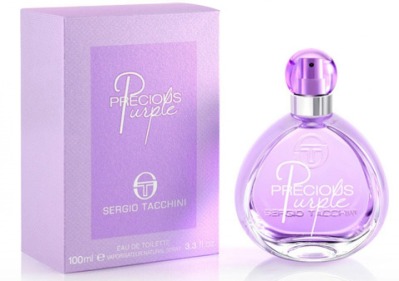