Gianfranco Ferré was an Italian designer who earned the nickname "the Architect of Fashion," both for his designs and for his background as an Architect. Born in Legnano, Italy, Ferré earned an architecture degree at Politecnico di Milano, but began working almost immediately in the fashion industry. First an accessories designer, then later a designer of raincoats, Ferré branched out to women's fashions with the formation of his own company, Baila, in 1974. His first signature women's collection was shown in 1978, with a men's collection following in 1982 and haute couture debuting in 1986. He was appointed Stylistic Director of Christian Dior in 1989, and split his time between Paris and his own fashion house in Milan. He would remain with Dior until 1997, when he returned to exclusively designing fashions under his own name. The connection between architecture and fashion design expressed itself in Ferré's designs via their rigid structures and clean lines. He is most famous for his crisp white shirts, simple but elegantly embellished with layered cuffs or ruffles. Ferré furthered the connection between architecture and fashion by joining the Domus Academy, a Milan-based post-graduate school for design, as a founding professor of its Department of Fashion Design. Ferré won the prestigious Occhio d'Oro ("Golden Eye") fashion award for Best Italian Designer six times, and his first haute couture collection for Dior received the De D'Or ("Golden Thimble") award. Ferré offered clothing under the labels of Gianfranco Ferré (women's), Ferré (ready-to-wear for men and women, formerly known as the "White Label"), GF Ferré (sporty fashions for younger men and women), Ferré Milano (casual wear) and Gianfranco Ferré Fragrances. The company's first fragrance, Gianfranco Ferre for Women, was issued in 1984. Many of the fragrances feature Gianfranco, Ferré or Gianfranco Ferré as part of the name. Gianfranco Ferré passed away in 2007 at just 62 years old and at the height of his career. The fashion house continues under the current Creative Directors, Stefano Citron and Federico Piaggi. The fragrance license is held by ITF Cosmetics and fragrances continue to be produced under the Ferré brand. Designer Gianfranco Ferre has 26 perfumes in our fragrance base. The earliest edition was created in 1984 and the newest is from 2015. Gianfranco Ferre fragrances were made in collaboration with perfumers Mark Buxton, Pierre Bourdon, Alexandra Jouet, Francis Kurkdjian, Karine Dubreuil, Maurice Roucel, Jean-Charles Niel, Michele Saramito, Olivier Polge and Alienor Massenet.
Read more
Perfume for women
Sort 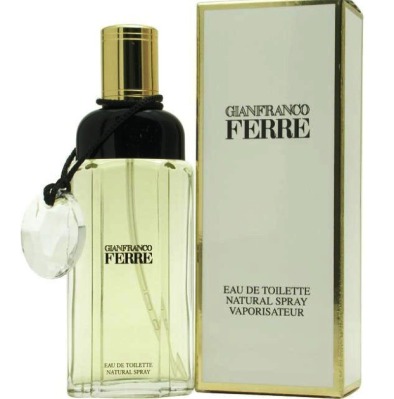